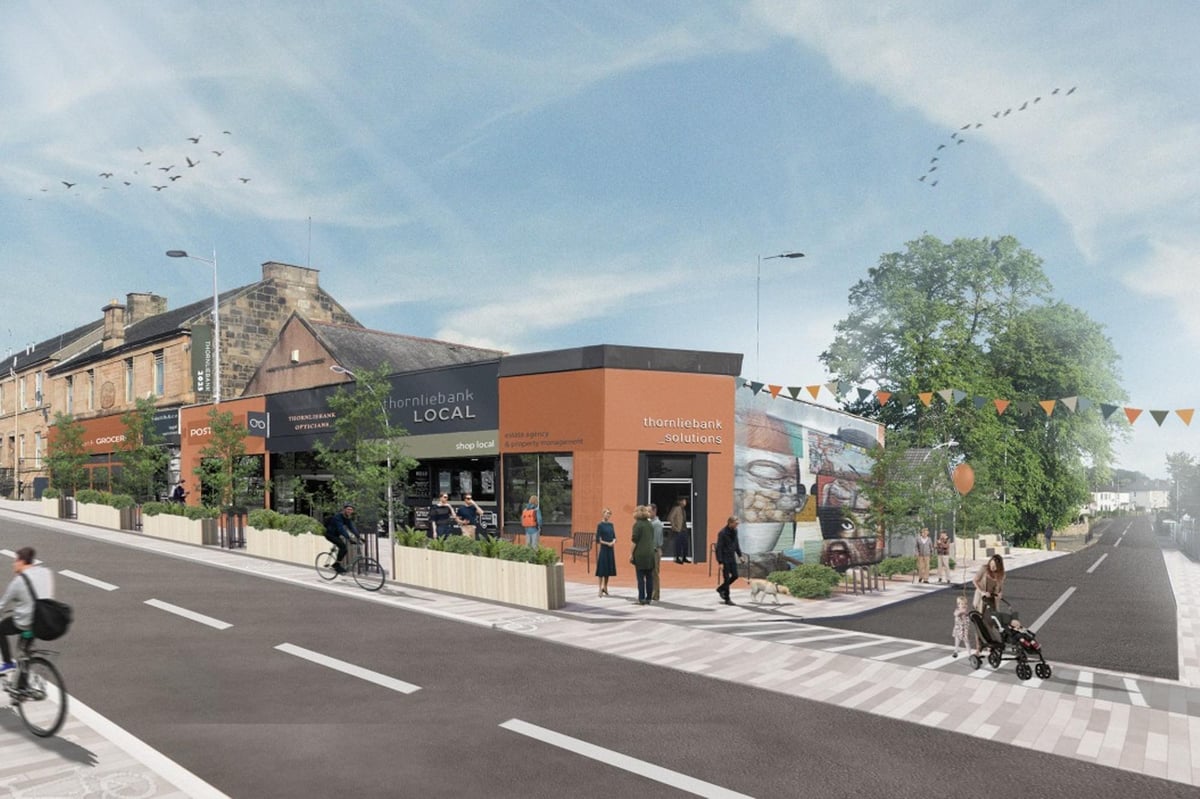 An artist’s impression of how Thornliebank could be transformed

East Renfrewshire Council is submitting the plan to the second round of the UK Government’s levelling up fund which aims to prioritise places requiring regeneration.

In Barrhead, a town centre park between Main Street and Church Street could be created and there are plans for “eye catching” artistic features, and seating areas, outside Asda.

A heritage trail would celebrate Barrhead’s industrial roots, including “striking” light projections that change the colour of the water along the Levern Water, and public art and street furniture, looking to the textile and sanitaryware industries for inspiration, could be installed.

An artist’s impression of the town centre park in Barrhead

In Thornliebank, a new public square between Thorntree Hall is planned, improving links to the health centre. The hall itself would be refurbished to create a community hub, which could house a food co-operative and community laundry as well as council services.

There would be a heritage trail to tell Thornliebank’s history, with a “key emphasis” on the Crum family, which was “responsible for the growth of Thornliebank through the printworks.”

Council leader Owen O’Donnell said: “One of the key things we want for this is to help boost a real sense of pride and place in some of our communities that are obviously deserving of regeneration funds.

“This bid is an opportunity to transform the towns of Thornliebank and Barrhead and once thriving areas of industry, and scientific innovation, that have been disproportionately affected by industrial decline.”

If successful, the council would contribute an extra £2.2m to the project, taking the total cost to £22.2m. Funding announcements will be made in autumn this year.

The theme of East Renfrewshire’s bid will focus on the “interconnected network of rivers and water courses running through Barrhead and Thornliebank” which were “harnessed and engineered to support the textile and other industries in the 1800s.”

Barrhead’s planned new park could be named after Lady Glen, a philanthropist from the area, while lighting the Levern Water has been suggested with a council report saying: “In the days of the print works, the water would have turned the colour of the dye they were using that day.”

Funding would also be used to improve Barrhead Burgh Hall and James Maguire Building and the central reservation along Main Street would be removed or redesigned, providing more space for walking, wheeling and cycling.

Other ideas to transform Barrhead are new and enhanced civic space on Main Street, including pop-up markets and events, a shop front improvement grant scheme and space for a food co-operative and/or community laundry.

Acquiring and redeveloping empty shops is under consideration as well as identifying opportunities for affordable housing.

Further plans for Thornliebank include improving existing parks and green space, identifying empty properties which could be converted into housing and making better use of “neglected lanes and open space behind commercial units and Thorntree Hall on Main Street.”

The council also wants to provide a cycle route, which links from Main Street to the health centre, the local primary and secondary schools, Thorntree Hall Community Centre, the library and the park.