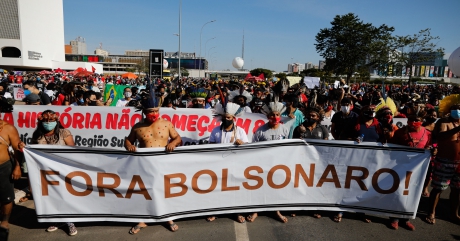 For revolutionary socialists, struggles in workplaces and in the streets are far more important than voting in elections. Yet for many workers elections are the high point of political activity in capitalist countries and, in the absence of a mass socialist movement, offer significant opportunities for interventions by socialist activists.

There is no better example of this than the current Brazilian election campaign for president, governors of the states, federal and state deputies, whose first round will occur on October 2.

Socialists need to actively intervene to defeat the neofascist and genocidal president Jair Bolsonaro. But how do we this? Joining the popular front campaign of the reformist Workers’ Party (PT), the Party of Socialism and Freedom (PSOL), the misnamed Brazilian Socialist Party (PSB) and Communist Party of Brazil (PCdoB) as well as six allied capitalist parties or supporting small, independent socialist campaigns?

PSOL, formed in 2003 as a breakaway from the PT and made up of radical social democrats and a minority of revolutionary socialists, had an incredible opportunity to build an independent socialist campaign with its own presidential candidate, but narrowly voted to join forces with the popular front led by the PT. The party also formed a political federation with the REDE, a green capitalist party.

PSOL leaders and activists have melted into the popular front campaign of the PT with little or no independent voice. The fight against the attacks on workers’ rights, pensions, healthcare and education has taken a back seat to the watered-down reformism of the PT which has consistently waffled on promises to revert the drastic cutbacks of the Bolsonaro government. Struggles against oppression, climate change, etc. have been marginalized to fit into the broad anti-Bolsonaro campaign led by the PT.

In addition to courting the support of capitalist parties, the PT chose a right-wing politician and former governor of the state of São Paulo, Geraldo Alckmin, as the vice-presidential candidate of PT leader, Lula. Several hundred leading activists in PSOL resigned in disgust. Even stalwart PT activists have had difficulty accepting Alckmin.

Does all this all mean that we should support the small revolutionary socialist campaigns in the first round of presidential elections and for governors and deputies? Some comrades would say, yes. I would argue, no.

A loose federation of the Unified Socialist Workers’ Party (PSTU), another small Trotskyist party and some dissidents from PSOL formed the Socialist and Revolutionary Pole to offer an independent alternative to the PT-led popular front. It has brought together a small, but impressive group of socialist militants from the trade unions and social movements. Its presidential candidate is the long-standing black militant, Vera Lucia, and its vice-presidential candidate, is the indigenous woman, Raquel Tremembé.

Despite divisions and disagreements on a number of theoretical and practical questions in the Brazilian revolutionary left, there is no doubt that it represents a group of legitimate militants who have contributed immensely to many workplace and social movement struggles over the years.

But the fact is that it does not represent a viable electoral force to overthrow the Bolsonaro government. Neither its presidential candidate nor its candidates for state and federal deputies have any chance of winning. More important than this and despite its correct politics in many respects, it will not galvanize significant sectors of the working class into a fighting movement.

The real lack of choice in the elections reflects a deeper crisis of a divided left in Brazil.

The Bolsonaro government ravished Brazil during the pandemic and is criminally responsible for the second-highest death toll in the world from Covid. It has constantly attacked workers, blacks, indigenous peoples, women and the LGBT community. 30 million Brazilians regularly go without sufficient food on a daily basis. The fledgling Brazilian welfare state, labour and pension rights have been gutted. Public healthcare and education are in crisis. Outright theft and corruption dominate the Bolsonaro regime. Political violence is on the rise and supporters of the Bolsonaro government have already committed at least two murders of PT activists and have threatened left-wing candidates without even mentioning the veiled threats of a coup from Bolsonaro and his allies if he is defeated in the polls.

Yet a mass socialist movement has not emerged to challenge this barbarity.

In this absence, the choice is clear: vote for the traditional reformist presidential campaign of Lula which stands a very real chance to defeat Bolsonaro, possibly in the first round. Fight independently but with other reformist and democratic forces against the likely violent reaction of the defeated Bolsonarists. And continue struggling and advancing socialist politics in the workplaces and streets and against the inevitable sell-outs of the reformist government of the PT after October 2.