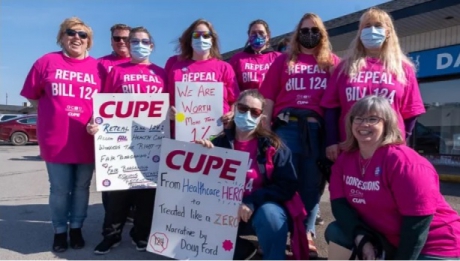 CUPE Ontario just concluded its 2022 convention, which took place via zoom April 27-29. Hundreds of delegates debated a variety of progressive motions from combating discrimination, to climate justice, to the low rates of social assistance. In addition to hearing from leaders from CUPE National and the NDP, delegates heard from Professor Akua Benjamin, a founder of the Black Action Defence Committee, who spoke eloquently on the issue of anti-Black racism and intersectionality.

But the most important issue facing CUPE members and public sector workers took center stage in terms of debates: Bill 124 – public sector wage restraint in Ontario, brought in by the Ford Tories in 2019. For the last 3 years, workers in the public sector have faced wage and benefit increases limited at 1%. All this while inflation has been rising, and is now 6% – leading to an ongoing wage reduction. While it is set to expire shortly, there is no indication that a Tory government would not renew it, or impose similar bill to replace it.

As we approach the June 2 provincial election, the Tories have adopted the approach of carving out certain groups from the legislation, among them police and nurses, while keeping it in place. With the distinct possibility of a renewed minority or majority Tory government facing the province’s public sector workers, the debate in CUPE took on added importance.

In CUPE, the Ontario Council of Hospital Unions (OCHU) has led the way, by proposing joint bargaining and building pickets around Ontario with the Service Employees International Union (SEIU), another of the important unions in the healthcare field. At the convention, an OCHU motion proposed common front bargaining for nursing, support, service and clerical staff in the hospital sector, and mobilizing CUPE members in support.

Absent from CUPE Ontario’s “Action Plan”, was a strategy, other than a legal challenge, to defeating Bill 124 – this despite the reality of a 5% reduction in real wages faced by CUPE members this year and beyond across the board. This is demoralizing for current members, and makes it all the more difficult to organize the unorganized, when all that is on offer is an ongoing reduction in compensation.

An activist (from the International Socialists) raised this issue directly by proposing a ‘working class strategy’, opposed to reliance on the courts and the politicians, to fight the legislation. This proposal also called for mass direct action, including strike action. In an important, but symbolic victory, this was added to the Action Plan. A number of delegates followed on with calls for a “general strike”.

Socialists certainly support mass strike action – but it has to be more than rhetorical, or nice words in an ‘Action Plan’ that subsequently collects dust in a union office. CUPE Ontario’s leader, Fred Hahn, while being generally supportive of calls for mass action, has in the past pointed to reticent union presidents as a reason for not making such a call. He pointed this out at the convention – but the debate cannot end there. An escalating strategy needs to be developed, and taken to the locals. This may include ‘hard’ pickets of Tory MPP offices, or occupations. In the end, one of CUPE’s sectors will have to demand increases in bargaining that falls outside the confines of the legislation, setting up a confrontation with the Ford Tories. The groundwork must be laid for this – in common fronts wherever possible, as suggested by OCHU.

While the groundwork will have to take place at the Local level, there will need to be a corresponding lead from the top. Not one that simply says that ‘the execs and members do not support a mass strike’. This will not do the trick, and will ensure more defeats in an already shrinking public sector, which faces constant pressures of privately delivered services on all sides. Instead of blaming the ranks and the locals, a lead is more necessary than ever from CUPE, to liaise with our public sector partners such as OPSEU, SEIU and teachers unions and others, (to include ‘private sector’ unions that increasingly represent workers in the public sphere). If local execs and activists feel there is a real, not a paper strategy, one that the leadership is willing to act on, they will be empowered to organize on the ground to build the action needed.

CUPE Ontario has a long and well-deserved reputation as a progressive provincial division of Canada’s largest union. Its activist tradition has led to almost continual growth over the years. But a ‘day of reckoning’ may be in the offing, brought on by four more years of Tory rule, and continued losses as a result. Our weakness will not go unnoticed by our corporate enemies – we best prepare for battle.