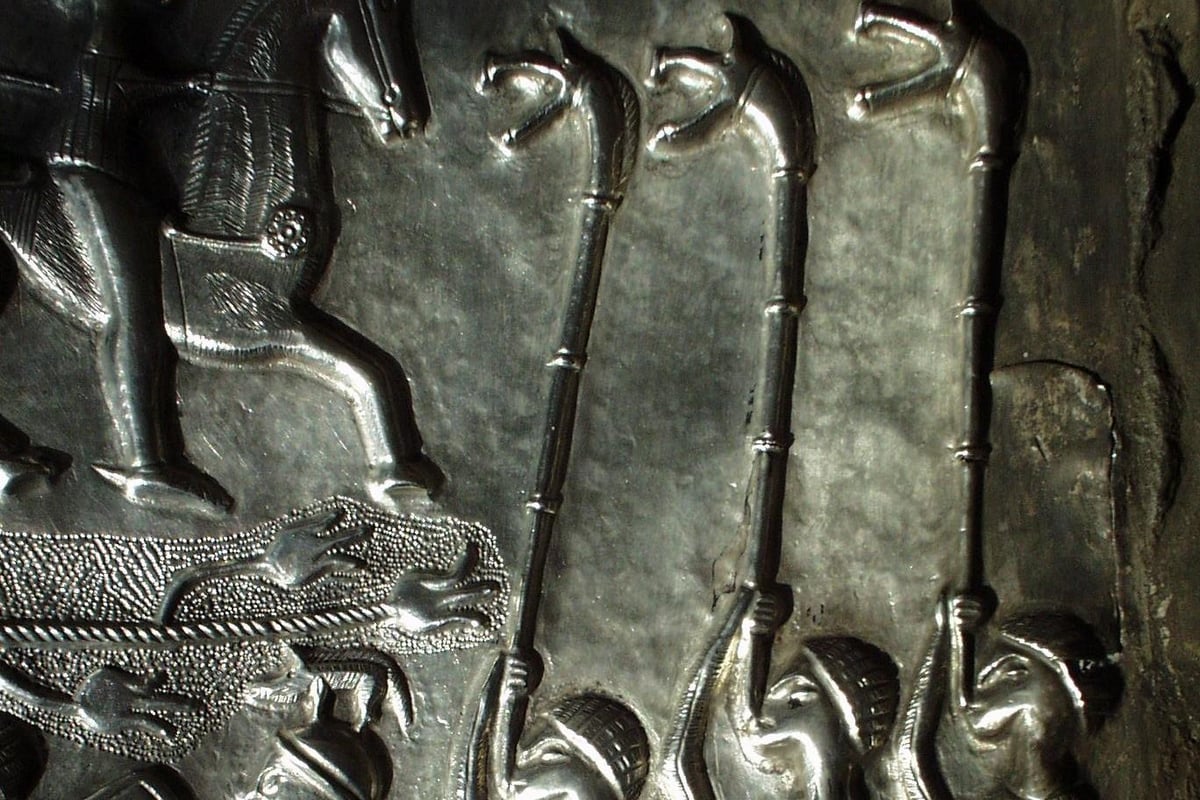 To most of us, the so-called early instrument movement stops with the likes of Renaissance sackbuts or double-reed racketts, or at a stretch back to the Medieval hand-cranked hurdy-gurdy. But for such a curious, creative and versatile musician as John Kenny, the early Iron Age has been a fruitful hunting ground, and he’s unearthed a real whopper in the monstrous shape and blood-curdling sound of the carnyx.

Not that Kenny was actually around in 1816 when fragments of this Celtic curiosity were first discovered at a farm in Deskforth, Banffshire. What they found was the bell of a warlike wind instrument shaped like a boar’s head. Thankfully, mention and images existed around the Celtic world – adorning the Gundestrup Cauldron discovered in Denmark, for instance – to help complete the broken picture.

Kenny’s involvement with today’s carnyx project began in the 1990s when, as a progressive trombonist and composer, he was approached by Scots music historian John Purser to act as playing consultant with a view to getting the Deskford Carnyx fully reconstructed, but more importantly, to hear what it might actually sound like.

Three carnyx players depicted on the Gundestrup Cauldron, held in the National Museum of Denmark, Copenhagen

“It must have taken me all of two seconds to say yes,” says the enthusiast who has dedicated the majority of his professional life since to mastering the instrument and creating music for it. What’s more, a centrepiece programme at this year’s Cumnock Tryst Festival on 1 October will feature not one, but for the first time in 2,000 years, three carnyces in consort.

“These are the only three examples existing in the world,” he stresses. “All the reconstructions are by Scots-based master metal craftsman John Creed, initially as part of our National Museum of Scotland project in the 1990s.” The original Deskford fragments are housed there.

Recreating the visual aspect – an elongated S-shaped blow shaft held vertically to support the bronze open-mouthed head and loose wooden tongue – was not the hardest challenge. “Otherwise we didn’t know what we were going to come up with,” Kenny recalls. “Would it just be a very beautiful object that proved to be a rather inert tube? To our delight it turned out to be a magnificent instrument, clearly related to the brass instruments we play today, the difference being its unique voicing and extraordinary colourings.”

All will be revealed threefold in Ancient Voices, the Cumnock programme that features Kenny, his son Patrick and former pupil Ian Sankey, collectively known as Dragon Voices. There’s a narrative to the presentation: music by Kenny himself that also utilises modern instruments and a multiple assortment of ancient Irish sea horns and Conch shells, but also the world premiere of Purser’s Gundestrup Rituals, inspired by five of the images on the Danish cauldron, all linked by Purser’s own reflective poetry.

“John wrote these for the Malta International Arts Festival three years ago, because I was performing my music there, Kenny explains. “Rather than dry programme notes he came up with dramatic poetic interpretations.”

As to the actual sound of the carnyx, there is, he says, nothing quite like it. “It has a range of five octaves, wider than most modern orchestral instruments. At its loudest it can over-volume the trombone, but is equally comfortable working at the same breathy pianissimo as the alto flute.”

He believes it’s a mistake to dismiss the carnyx, as many do, as merely a battle instrument. “No fragment has ever been discovered on an ancient battle site, only at very special sacred sites. Those discovered appear to have been sacrificed, ritually dismembered, like King Arthur’s Excalibur. To these people who made them, if they took them into battle it was because they were sacred, totemic objects. So what I’ve always felt is that their sacral nature is far more powerful than their warlike nature. Put more simply, they work more effectively when plated gently and quietly.”

Could there be any more carnyces lying undiscovered? “There must be,” reckons Kenny. “They will be hidden and buried, maybe under water or hidden under a supermarket carpark, who knows?” For now, though, three is plenty.

John Kenny’s Ancient Voices is at St John’s Church, Cumnock, on 1 October as part of this year’s Cumnock Tryst Festival which runs from 29 September until 2 October. Full details at www.thecumnocktryst.com