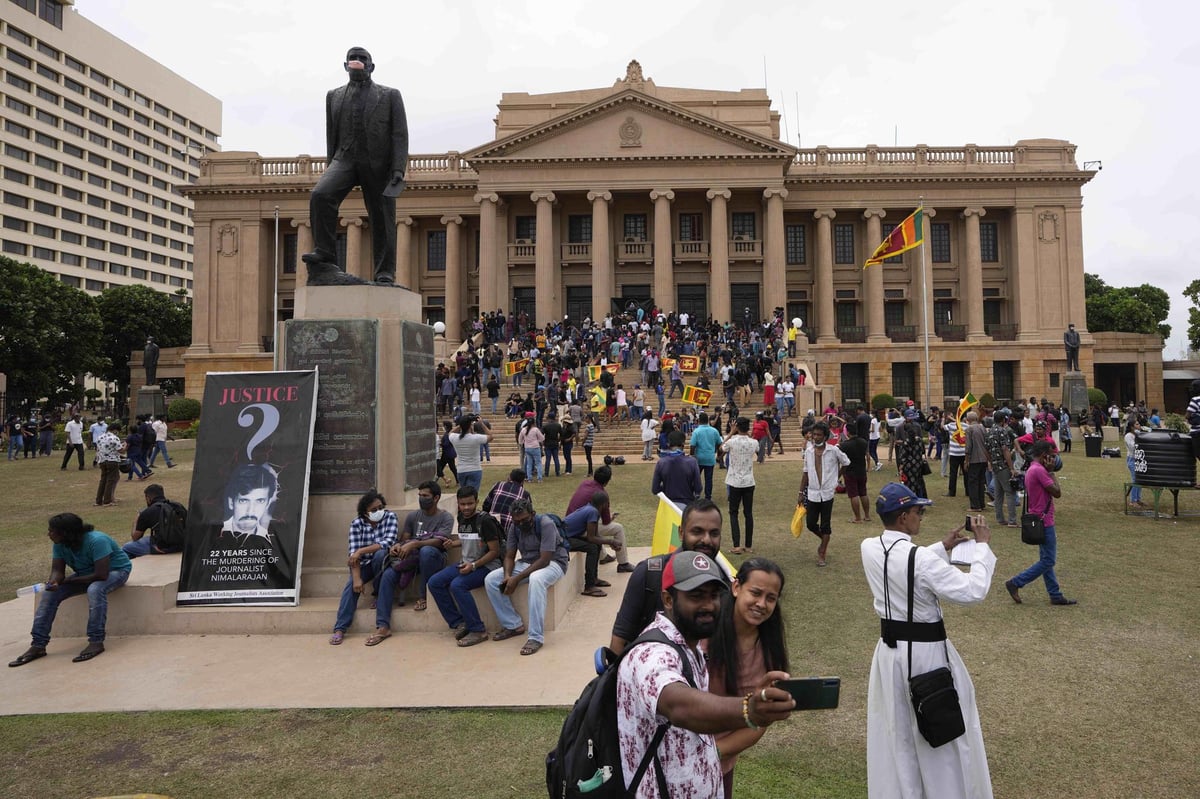 Protesters walk around and spend time at the ongoing protest site a day after storming into president’s office in Colombo, Sri Lanka, Sunday, July 10, 2022. Sri Lankaâ€™s opposition political parties will meet Sunday to agree on a new government a day after the countryâ€™s president and prime minister offered to resign in the countryâ€™s most chaotic day in months of political turmoil, with protesters storming both officialsâ€™ homes and setting fire to one of the buildings in a rage over the nationâ€™s economic crisis. (AP Photo/Eranga Jayawardena)

Opposition politician MA Sumanthiran said all opposition parties combined could easily muster the 113 members needed for a parliamentary majority, whereupon they will request President Gotabaya Rajapaksa installs the new government and then resigns.

He said the parties hope to reach consensus on Sunday.

Prime Minister Ranil Wickremesinghe said on Saturday that he will leave office once a new government is in place, and hours later the speaker of parliament said Mr Rajapaksa will step down on Wednesday.

Pressure on both men has grown as the economic meltdown set off acute shortages of essential items, leaving people struggling to obtain food, fuel and other necessities.

If both president and prime minister resign, speaker Mahinda Yapa Abeywardena will take over as temporary president, according to the constitution.

Thousands of protesters entered the capital Colombo on Saturday and swarmed into Mr Rajapaksa’s fortified residence. Video and pictures showed jubilant crowds splashing in the garden pool, lying on beds and using their phone cameras to capture the moment.

Some made tea or used the gym while others issued statements from a conference room demanding that the president and prime minister go.

It was not clear if Mr Rajapaksa was there at the time, and government spokesman Mohan Samaranayake said he had no information about the president’s movements.

Even though both Mr Wickremesinghe and Mr Abeywardena said in their speeches that they had spoken with the president, they did not say anything about his whereabouts.

Protesters later broke into the prime minister’s private residence and set it on fire, Mr Wickremesinghe’s office said. It was not clear if he was there at the time.

The country is relying on aid from India and other nations as leaders try to negotiate a bailout with the International Monetary Fund (IMF).

Mr Wickremesinghe said recently that negotiations with the IMF were complex because Sri Lanka is now a bankrupt state.

Sri Lanka announced in April that it was suspending repayment of foreign loans due to a foreign currency shortage.

Months of demonstrations have all but dismantled the Rajapaksa political dynasty, which has ruled Sri Lanka for most of the past two decades but is accused by protesters of mismanagement and corruption.

The president’s older brother resigned as prime minister in May after violent protests saw him seek safety at a naval base.